Following my day trip to Hiroshima I decided to take some time off for R&R. Contrary to what I had thought, Osaka wasn’t the best hub city. Since the AirBnB I picked for $21 a night didn’t have a great location, I was facing 40 minute trips to Osaka station every time I did a day trip. On evenings when I returned from a day trip, most of the city (save for arcades, bars, and hostess clubs) were closed by 8 p.m. In short, I was pretty ready to move on.

August 31: Once I regained my mental and emotional strength, I set out for Himeji to see the castle. Known for being one of the “finest surving example of prototypical Japanese castle architecture” (Wikipedia), Himeji stands tall upon a hill.

I passed through a market street… 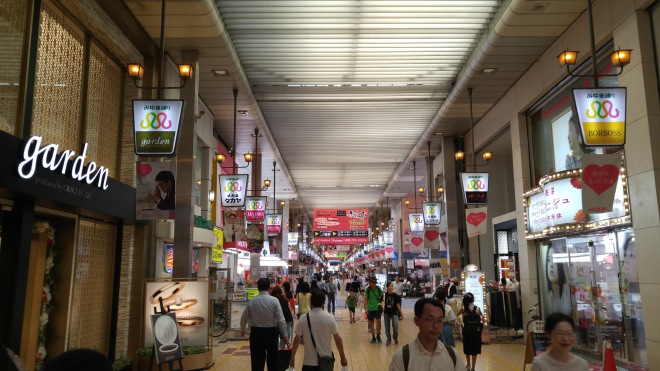 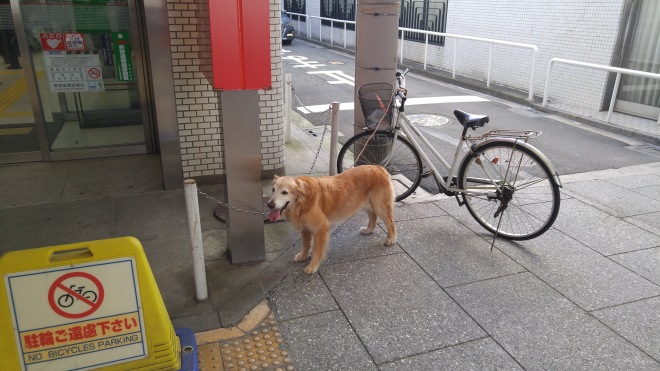 …and arrived at Kokkoen garden. Here I purchased a combined garden and castle pass for ¥1,040. Since I have no idea what most (any) of the plants were, I’ll just leave the pictures below. 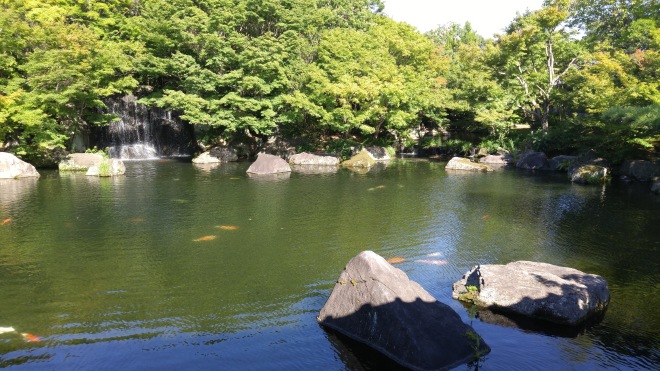 About midway through my journey in the garden I came upon a tea house. Here I took part in my own personal traditional Japanese tea ceremony. For ¥500 I got excellent tea and some type of sweet (tasted like marzapan with red bean).

From the garden you can either walk about 10 minutes one way and get right to the castle gate, or walk in a big spiral for about an hour to get to there. I decided on the latter. Seeing the castle after that walk was well worth it. 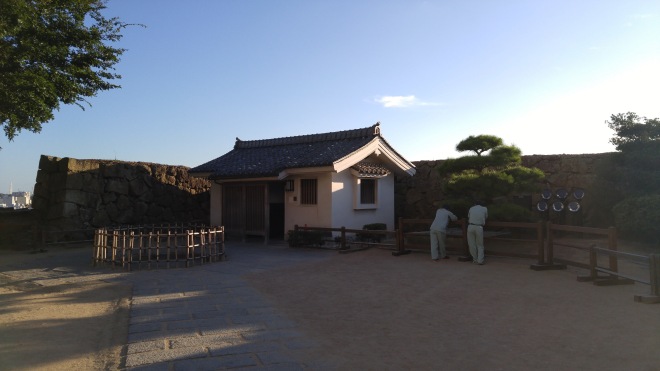 For dinner I went to a local all you can eat Japanese barbeque place. While the agreed upon price was ¥3,500 (and I asked multiple times to make sure I was ordering off the correct menu), the manager attempted to charge me for everyting – which amounted to about ¥8,600. After about ten minutes of him giving me a ton of attitude and us arguing back and forth (with help from Google Translate), he threw his arms up in the air in frustration and gave me the correct price. Did I mention this happened while the last train back to Osaka was leaving in less than 20 minutes? (Don’t worry, I just barely made it).

September 1: After the frustration of the previous evening I had another stressful day of travel to Kyoto. Due to a combination of terrible directions, an utter lack of English signs anywhere, and generally rude customer service, it took me an extra four hours to arrive. Fun fact: while the ATMs at convenience stores offer 20 different languages, those at BANKS (or at least the one I went to) only offer Japanese (and are only for Japanese people).

My luck seemed to turn up when I arrived at my AirBnB. It was absolutely gorgeous! A semi-modernized traditional Japanese home turned into a guest house. After a week of not-so-great conditions in Osaka I was so thankful. I took off my huge backpack, settled in, and then immediately set out for Nijo Castle.

While Nijo Castle is regarded as the most popular tourist destination in Kyoto, it closes its gates to new visitors at 4 p.m. – even in peak tourist season. Myself and a crowd of about 50 tourists from all over the world discovered this at about 4:05 p.m. They made no exceptions. (I also spent about 10 minutes considering scaling the wall of the castle)

Finally burnt out, I decided to take the rest of the day to relax. A quick Google search helped me find a great café for reading, where I spent the next five hours drinking tea and, well, reading. 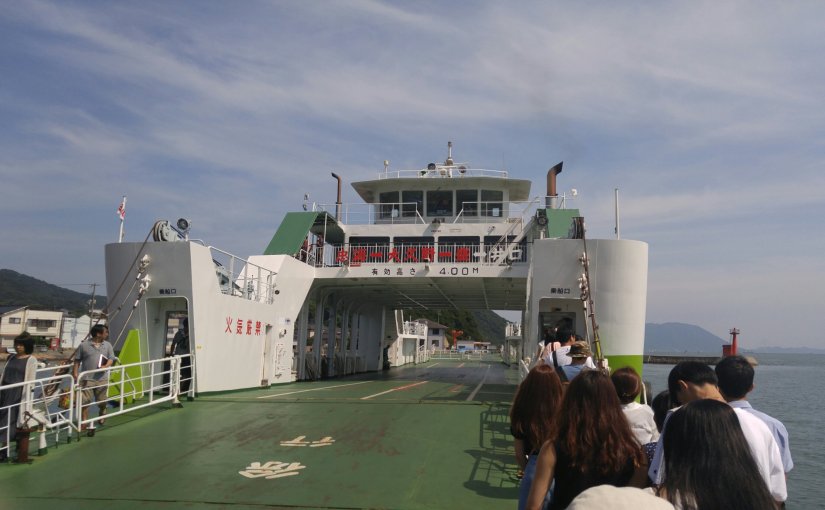 August 26: Osaka Castle was my first and only stop for the day. I wasted no time getting there since the journey by foot was about two hours. 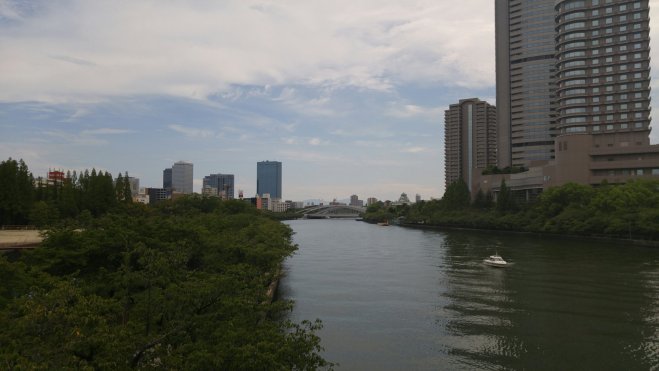 The majority of the area that houses the castle is a huge park, filled with plum trees, peach trees, and gardens. 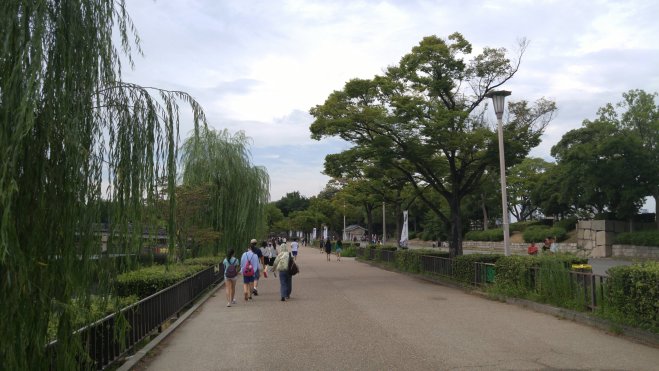 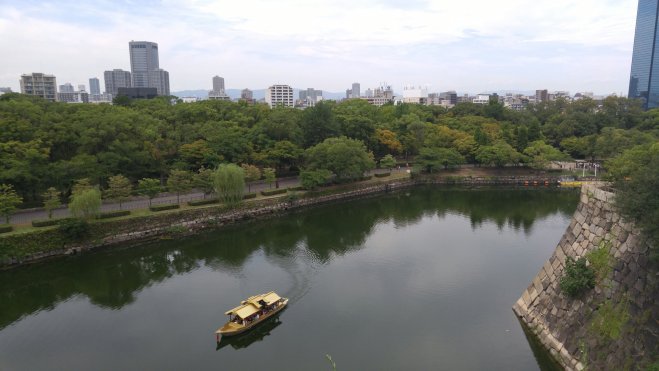 However, the castle itself is rather small and is on its third iteration after burning down twice over the years. The most recent construction happened in 1583, so things are looking up. Speaking of looking up…

Inside the castle was a very cramped eight floor museum wherein you aren’t allowed to eat or drink (even water as far as I’m aware). It didn’t take long until I was bored so I quickly climbed to the top floor to snag some photos before descending.

On the way home I stopped at Shinseki – an area renowned for its food – and got an okonomiyaki (japanese style pancake) for dinner. In addition, I discovered a 24-hour grocery store called Super Tamade where the selection is fantastic and you can buy delicious ready-made food for ¥100. 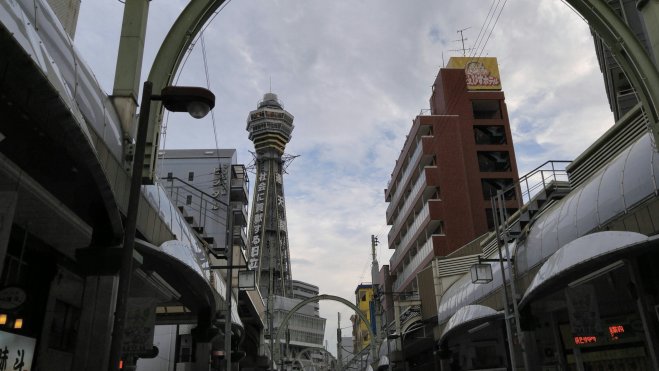 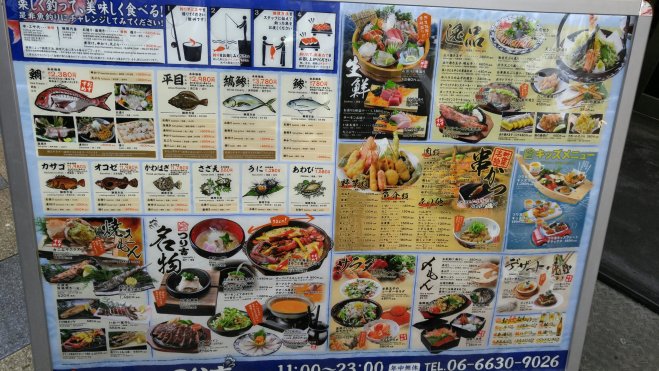 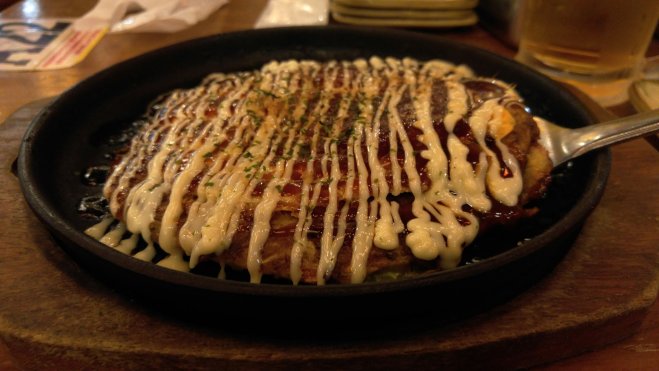 I chose to end the day early and spent the evening watching Netflix and writing.
August 27: Five hours is how long it took me to finally arrive at my destination; on paper, it was two and a half. I’ll spare the details, but let’s just say everything is slow and infrequent in rural Japan. 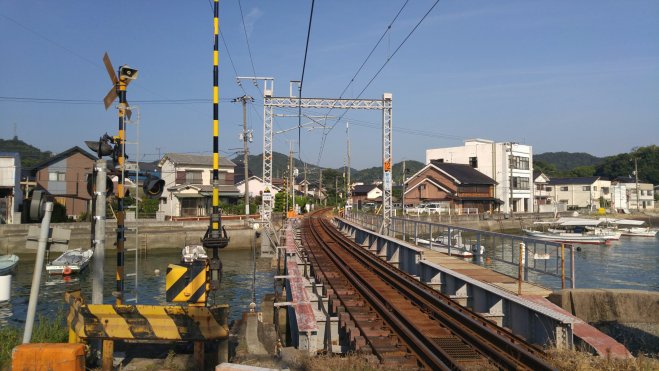 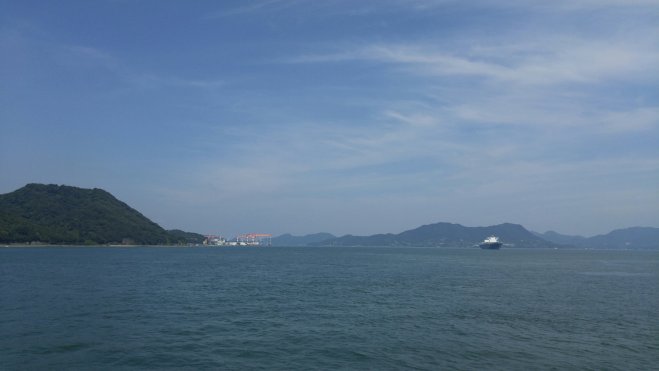 Where was I headed that made this journey worth it? Rabbit Island.

Rabbit Island (AKA Okunomashima) is located about an hour outside of Hiroshima and, much like the name suggests, is an island filled with thousands of bunnies. 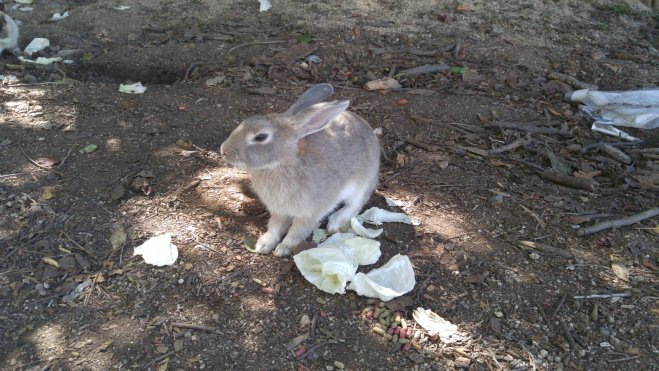 While no one knows for sure how the bunnies got there, two prevailing theories do exist:
1) During WWII the Japanese were using the island to develop poisonous gas. They used bunnies as test subjects. After the war, locals set the survivors free. Today’s population is the result of the remaining rabbits’ breeding over the years.

2) In 1971 a group of school children were taken on a trip to the island. With them, they brought a bunch of rabbits which were left there to be free in a safe haven. Again, today’s population came from years of breeding.

No matter which theory is the correct one, something is for certain: the rabbits LOVE the island. It has been set up as a sanctuary for them, with plenty of tourists and locals feeding them every day (with fresh veggies and rabbit food) and water set out every ten metres or so. 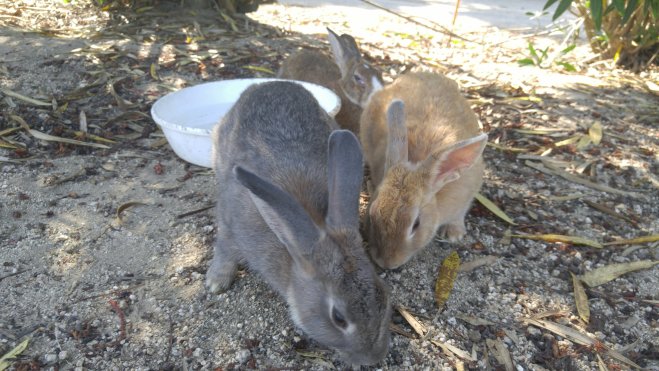