September 2: I arrived in Yugawara at about 1 p.m. The AirBnB’s host, Masato, picked me up from the train station and drove me up to the guest house. It was on this drive that I realize just how much hiking I would be doing in the coming days. A hint of dread washed over me; the route was along a very steep hill.

Upon arrival at the AirBnB Masato let me drop my things in my (then empty) room then showed me around. He showed me all the anemities including the rooftop terrace which boasted an incredible view. I soon found myself unable to keep my eyes open, so Masato brought in a small lounge chair of sorts that I could sleep on until the staff member returned to prepard my room. 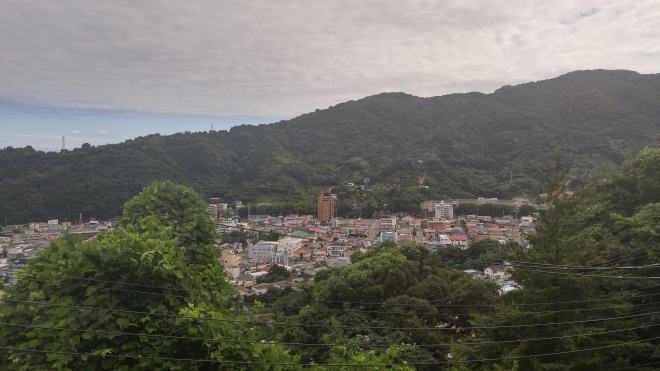 I awoke fully rested, albeit slightly disoriented from the journey. A knock at the door soon after indicated the return of the aforementioned staff member, with whom I would become good friends during my stay.

For dinner I had my first home cooked meal in weeks. The three of us ate and spoke for about an hour before supper came to an end and I was informed that it was time for karaoke. Having never participated in karaoke (save for one near delirious rendition whilst in Beijing a number of years ago), I was terrified. An hour later I was loving it (a sentence I never thought I would say in reference to karaoke). This routine would continue for the following two nights. 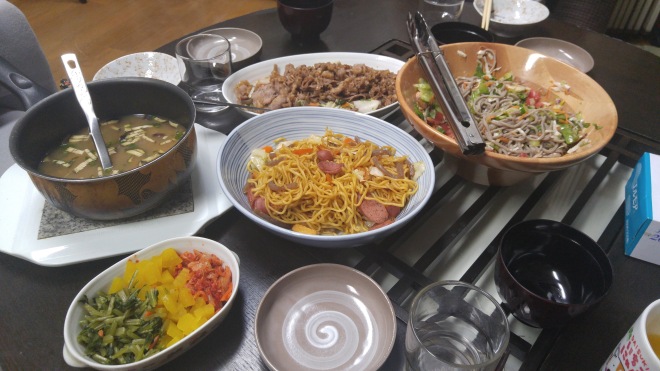 September 3: I woke up bright and early and set out for the hot spring town of Hakone. Following the advice of my host and his staff, I purchased the two-day Hakone free pass for ¥4,000 (it may sound expensive, but trust me, it will save you a ton of money). The trip was longer than expected, mostly due to the slowest tram ever, so I arrived at around noon.

A short bus ride from the station later I was walking along Old Tokaido Cedar Avenue (or at least something that looked just like it) – a forested area with a beautiful path through the trees. The path ended up leading me to the shore near Motohakone port, where many tourists were soaking up the sun. 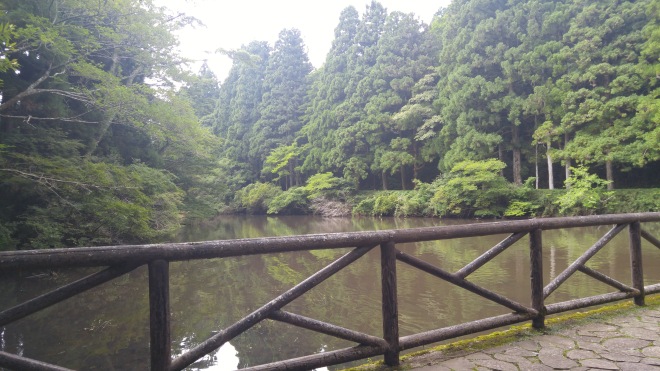 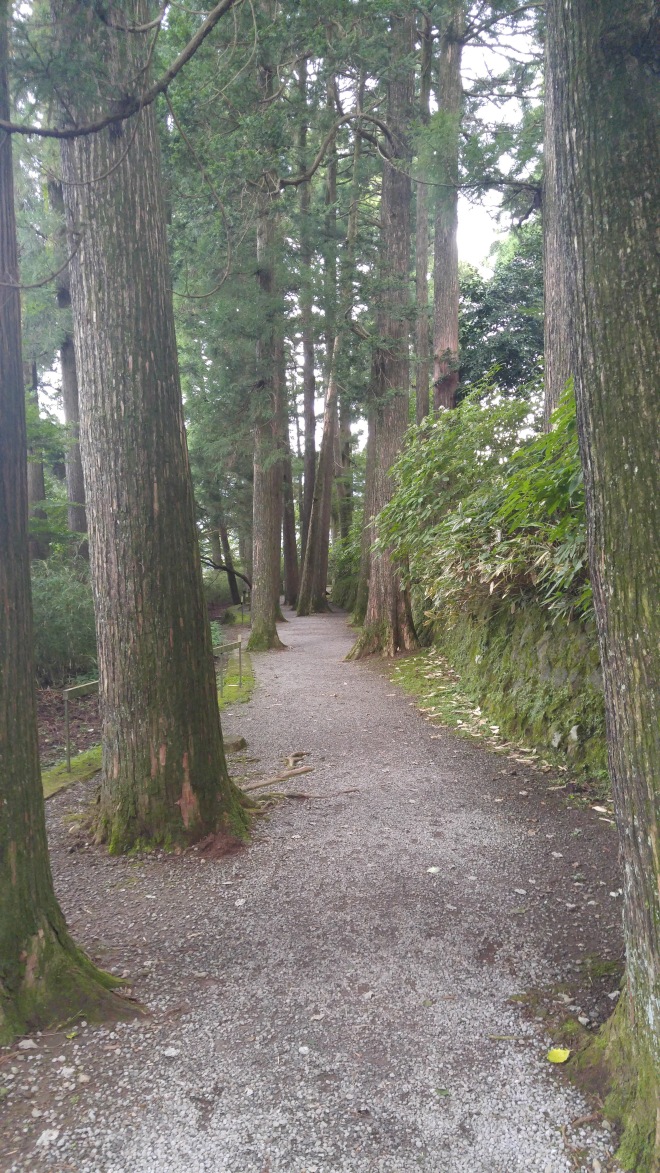 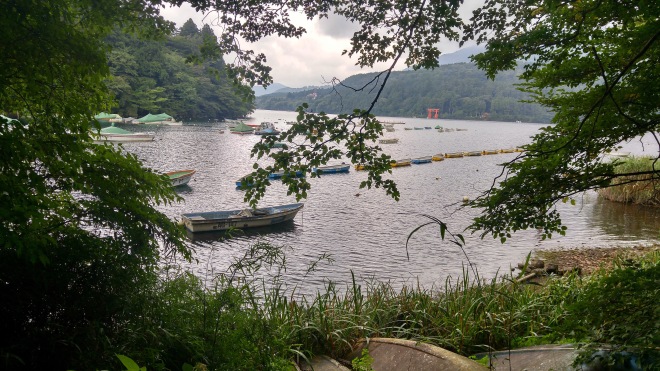 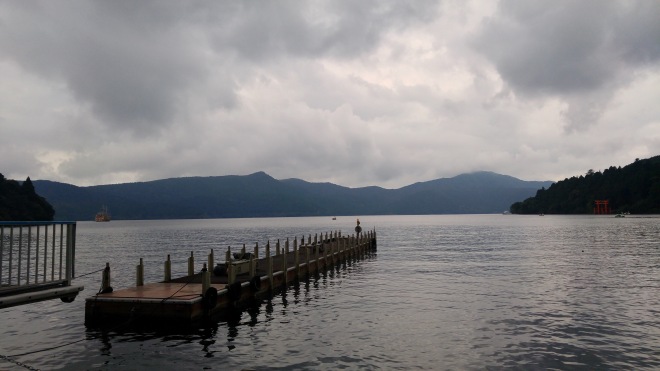 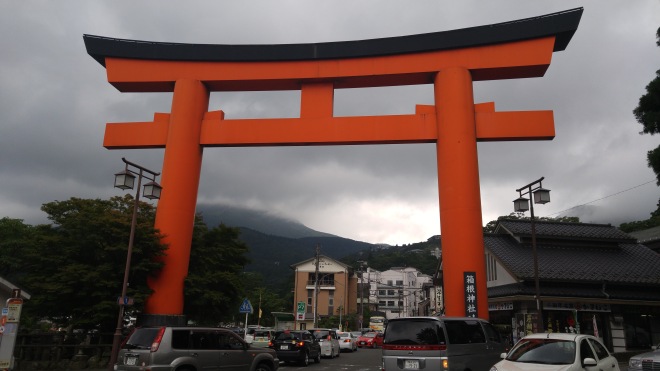 Rather than join the multitude of tourists at a restaurant by the shore I chose to walk to Amazake Chaya tea house. After about 20 minutes of “hiking” along the road, I noticed on my map that I was adjacent to the route, not on it; I figured this explained the lack of other travellers despite the busy train ride over. I reoriented myself and soon joined up with the intended hiking path.

While much more sceneic, this route was almost entirely composed of large slippery cobblestones, occasionally covered in moss, that wound up and down hills. 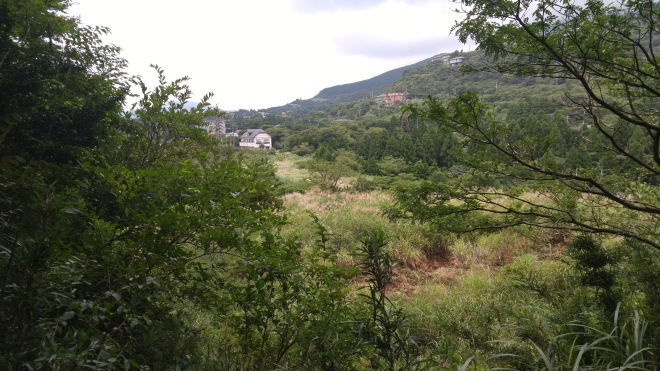 Still, there was no one else so I wondered if I was indeed in the correct place… That is until I saw a sign pointing toward my destination and was passed by two old Japanese ladies who put my usually quick-paced walking to shame. Nearly an hour of hiking later I arrived at Amazake Chaya tea house.

Turns out quite a few Japanese people (and a few foreigners) do know about this famous tea house and the route to it. However, due to the difficult path and the fact that it is hidden by woods, most choose to take the bus or drive right over.

Feeling rather accomplished, i strutted to the front of the line and claimed (bought) my reward. I ordered a perfectly reasonable and not unhealthy at all amount of freshly baked(?) mochi and amasake.

Oh, and of course I enjoyed some free tea… It was a tea house after all. 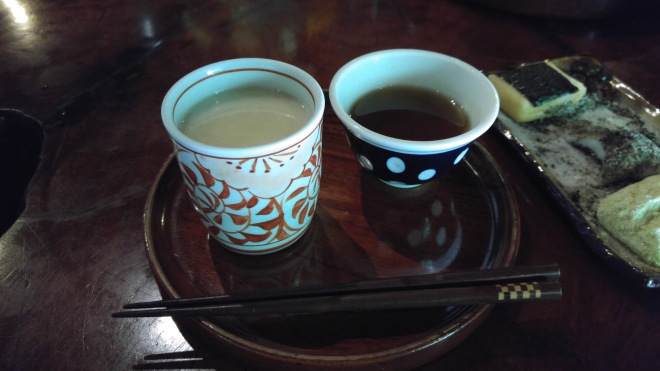 No longer famished nor willing to repeat the same journey as the way over, I took the bus to Motohakone port. Upon arrival I quickly boarded the pirate ship (yes you read that right). I initially tried to enter the first class lounge, not realizing you needed to pay extra, and was laughed at for my mistake by a wealthy family. Sulking, I walked up to the highest deck to begin my sightseeing tour of Lake Ashi. 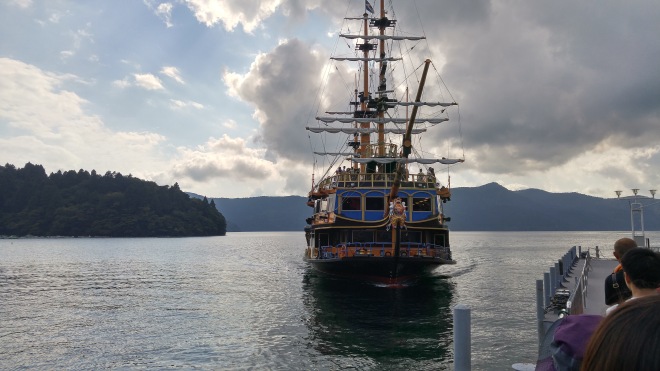 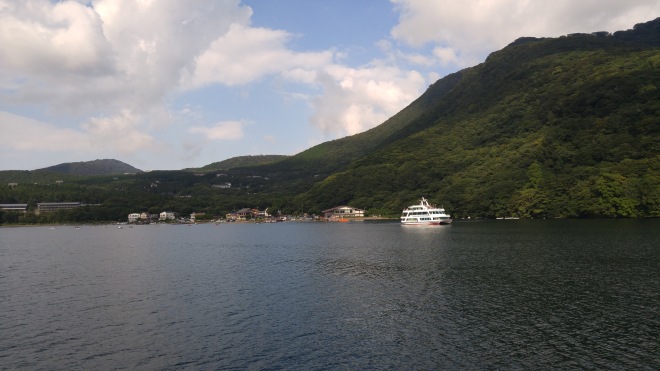 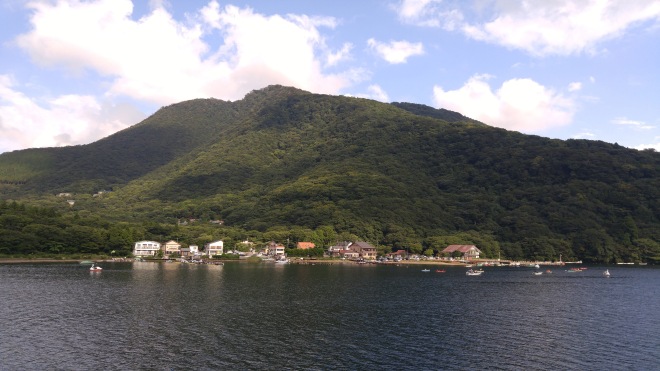 The pirate ship let off at Togendai station, where I lined up for the ropeway. I’m told the ropeway was actually closed for a couple years due to the amount of volcanic ash. Had I known this beforehand, I probably would have been a bit nervous. Instead, the only negative thought on my mind was annoyance at the dirty windows, which made picture-taking and scenery-enjoying difficult. 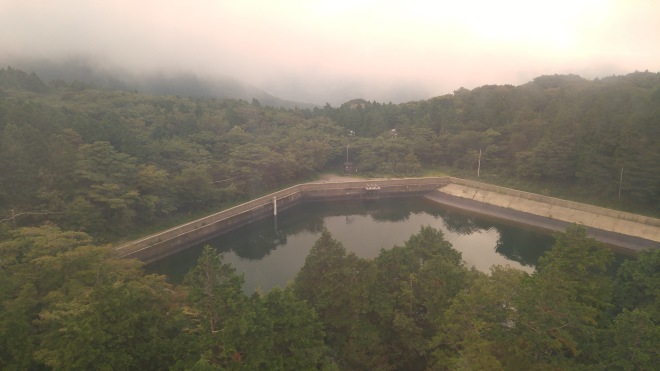 Upon reaching the next pit stop, I pried myself away from the café boasting a scenic view (reminding myself of the perfectly healthy and not unreasonable at all amount of mochi I had eaten for lunch earlier). The cable car leaving from this area travelled the rest of the way up the mountain, passing the hot springs (not to be confused with their associated baths), and then finally descended to the tram station.

And of course, this was all followed by a home cooked meal and karaoke. 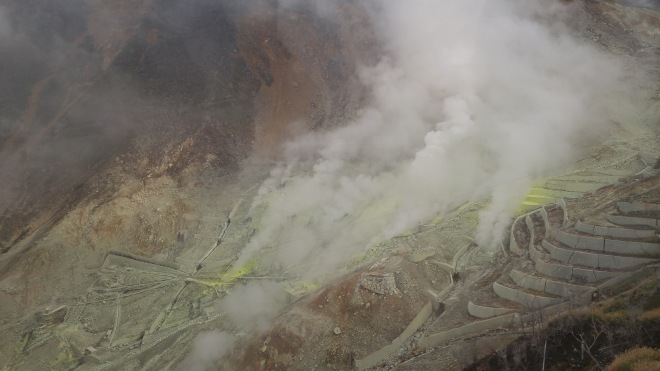 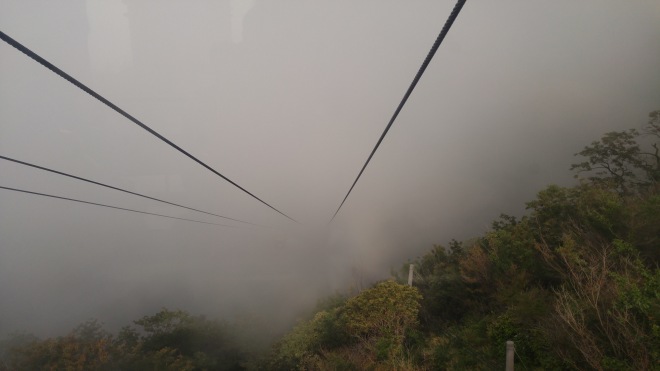 September 4: I woke up at 12 p.m. to an overcast sky and quickly ditched my plans for the day. Having already seen most of the major tourist spots in Hakone the previous day, I took the day to relax. I had some lunch with the AirBnB staff and then the three of us (myself and two staff) headed to the beach. When we arrived the tide had gone pretty high, so the “beach” was non-existent.
Instead, we walked around the area hoping to find another beach-y area, but to no avail. Before giving up, we watched a young Japanese guy fish for about 15 minutes (I imagine it was pretty creepy from his perspective). Then we headed to a field to show off our utter lack of volleyball skills to each other. 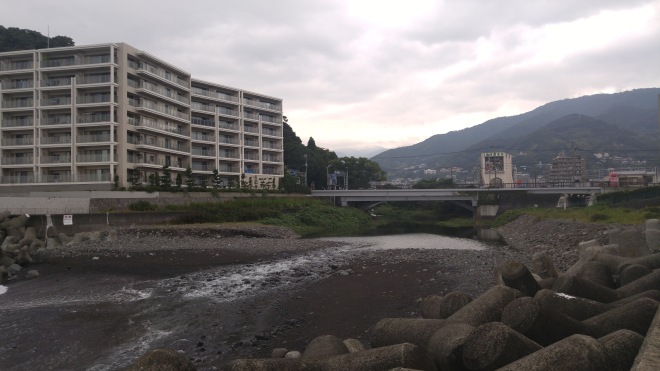 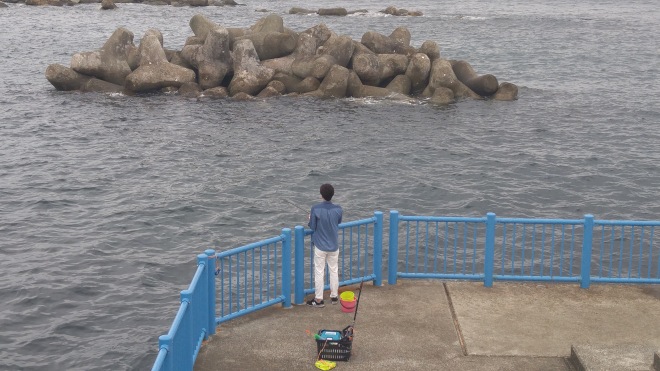 When the rain grew too heavy we began our long walk back to the AirBnB, stopping for ice cream along the way. We didn’t know this at the time, but apparently aside from having lots of cow decorations, this ice cream shop also has udders out front that you can milk for water. Anyway, the ice cream was fantastic; I had soda flavour because it was blue (I’m dead serious). Luckily, the steep hill back to the AirBnB wasn’t slippery when wet, so we got back with relatively little difficulty. 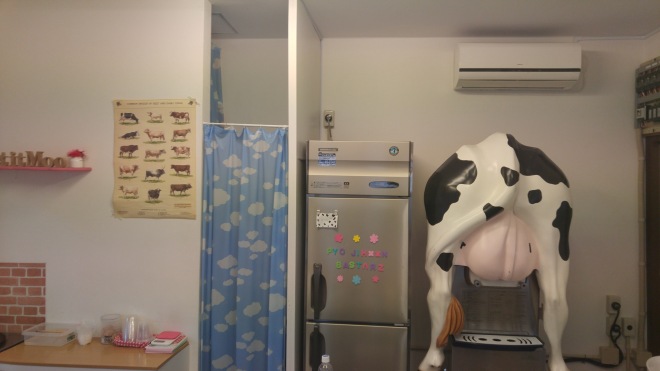 Another home cooked dinner and two hours of karaoke marked my final night at Masato’s spectacular AirBnB in Yugawara.

August 17: My flight – consisting of watching three movies and reading none of the four books I brought on board – landed at about 9:30 p.m. local time. Having managed to stay up most of the flight I was absolutely exhausted by the time I went through customs, grabbed my baggage, bought a SIM card, took the MRT to Taipei Main Station, and finally lugged my suitcase up 5 flights of stairs to arrive at my AirBnB.

August 18: I woke up at 8 a.m. convinced I had already overcome the jetlag (hahaha, no). After a quick trip to 7-11, I took a much needed shower, drank enough water to hydrate a horse, and headed out to Taipei 101. 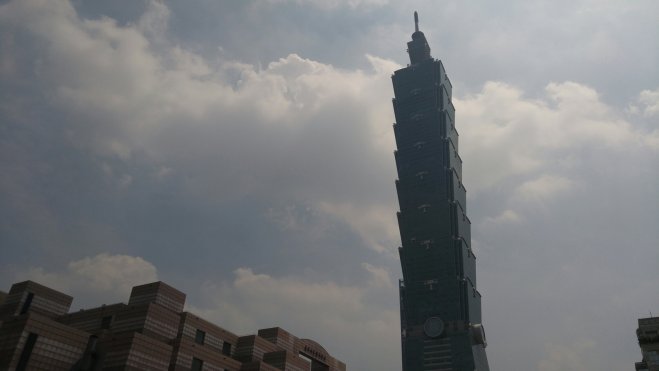 Once I got to the Taipei 101 mall I immediately went down the first escalator I saw (my belly rumbling like crazy as I did so) and made a beeline for Din Tai Fung. Needless to say, I wasnt the only one with this place on my mind. Luckily being a party of one helped me grab a table with relative ease. 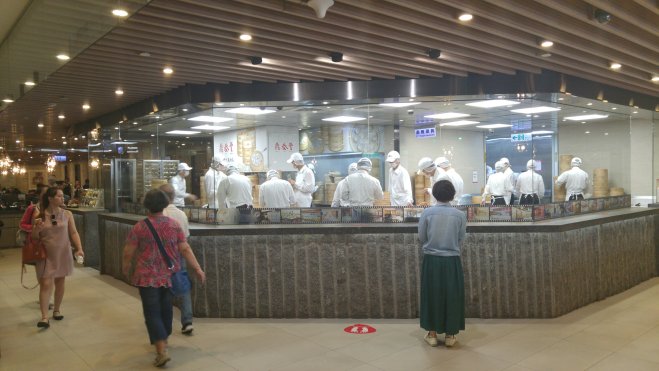 For those of you unfamiliar with Din Tai Fung, it is a world-renowned chain of dim sum restaurants that originated in Taiwan. They are most famous for their xialongbao (soup dumplings). For lunch, I ate xialongbao, steamed pork buns, and spicy vegetable dumplings. 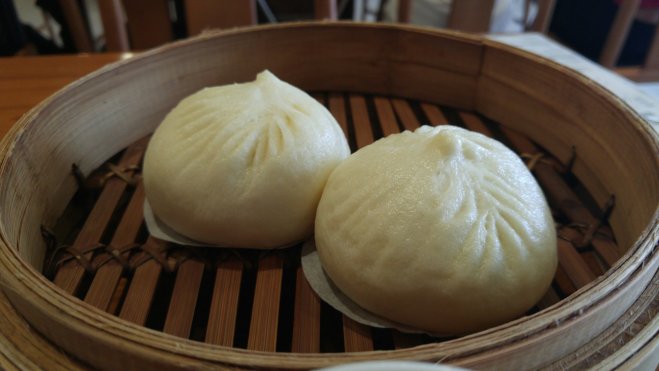 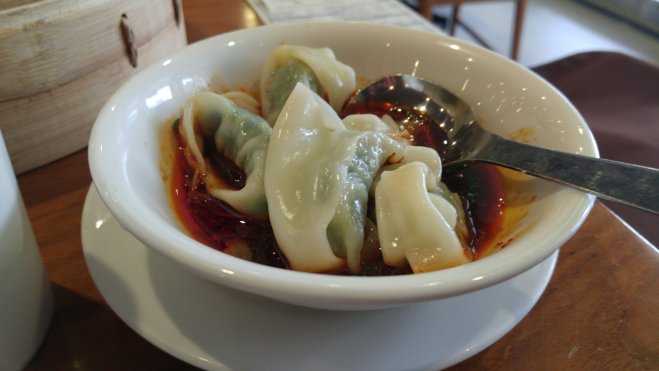 For 600 NTD I bought an adult pass for the Taipei 101 observatory – a massive building that ranks amount the tallest on Earth. Even the elevator boasts a former world record for its incredible speed (~600M/min). The 360° view of the city was incredible (and incredibly intimidating too if I’m being perfectly honest). 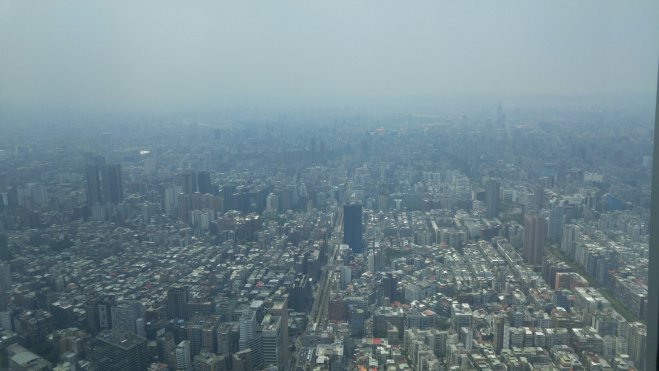 Had my stomach not been upset from travel, I would have been able to enjoy bubble tea, mango frozen desserts, and pineapple cakes. 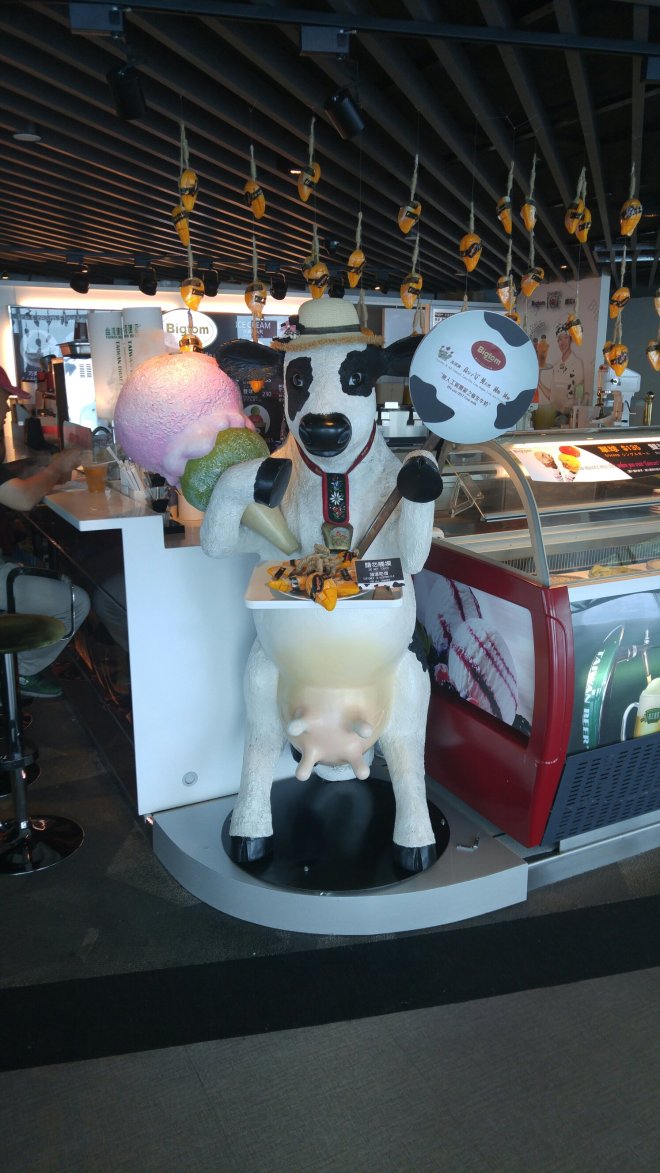 Hanging in the centre of the obsevatory floor there was a huge wind damper that prevents the tower from swaying during typhoons and other inclement weather. 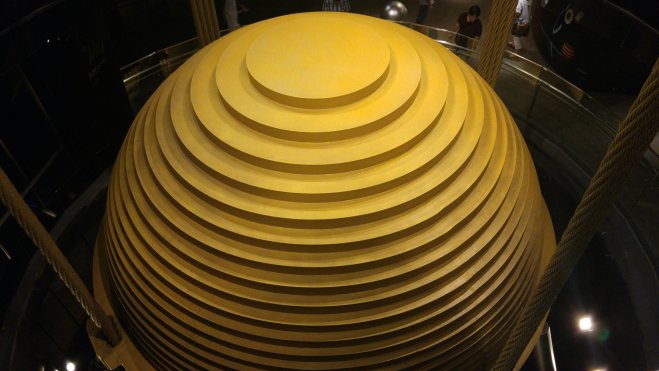 On the way down from the observatory I passed through a (mandatory) exhibit for the Taiwanese coral gemstones. Here are some of the neater sculptures:

Desperately needing a break from the heat and humidity I went back to my AirBnB for some R&R plus air conditioning.

For Shabbat dinner (Jewish sabbath) I visited Chabad, where I conversed with the Rabbi who has been living here for the past six years. A few brief conversations later I excused myself so I could go back to the AirBnB and pass out for the night.